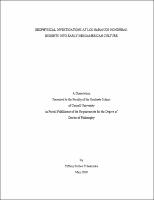 This dissertation discusses the results of three-dimensional ground-penetrating radar (GPR) data and magnetometry data conducted at the archaeological site of Los Naranjos, Honduras during the summer of 2003 and spring of 2007. The goals of these surveys were to augment limited archaeological excavations of a joint Cornell University - University of California, Berkeley field program and to non-invasively image the subsurface in three dimensions to identify potential archaeological and geological features that may relate to specific occupations of the site. Non-invasive geophysical methods are particularly attractive at sites like Los Naranjos, as the Instituto Hondureno de Antropologia e Historia (IHAH) designated a portion of the site as the Parque Eco-Arqueologico Los Naranjos to be preserved and protected from future extensive excavations. Closely-spaced GPR profiles that resulted in three-dimensional grids of data, individual GPR transects, and grids of magnetometry data were acquired within a region of Los Naranjos approximately 1 hectare in size, adjacent to Structure IV, a large earthen platform mound located within the Principal Group. Extensive velocity analyses performed on the six common mid-point (CMP) profiles collected at Los Naranjos provided accurate time to depth conversions of GPR data. Three dimensional migration corrected GPR reflection profiles so that they accurately represent the subsurface and increased the resolution of features. Ground-penetrating radar delineated Quaternary stratigraphy at depths ranging from 2 to 6 meters in almost all areas of the site and proved effective at identifying buried geological features such as basins, complex layering, strata onlaps, unconformities, and possible volcanic marker horizons and faults. Archaeological features such as a presumed buried structure and potential buried sculpture were also imaged by GPR. The GPR results have also been useful at distinguishing between natural and anthropogenic features exposed at the site as well as probing the interior of a portion of Structure IV. Correlation with magnetometry data helped distinguish between different lithologic materials and artifact compositions. The GPR results obtained at Los Naranjos demonstrate considerable potential for this technology in delineating both geological and anthropogenic structures. Most importantly, GPR and magnetometry have proven especially effective for probing this protected site in a non-invasive and non-destructive manner.