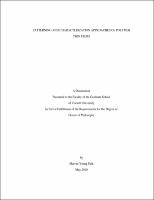 Polymers have been used in thin film coatings as a way to produce tailor made surfaces. These thin films have been explored for use in a variety of applications to produce antifouling coatings, corrosion resistant coatings, biocompatible surfaces, and biomedical devices. Polymer brushes, polymer chains tethered to a substrate or surface, synthesized by surface-initiated polymerization have gained significant attention in recent years. As brushes offer a new pathway towards the preparation of functional surfaces and offer long term stability, even in adverse environments, they are attractive for use as high-tech coatings. Patterned polymer thin films have also seen growing interest for various applications. This dissertation will focus on the top-down direct patterning of polymer brushes and the bottom-up self-assembly of block copolymer thin films. A new approach to creating patterned polymer brushes is highlighted, which is a simpler approach than what is conventionally done. Various polymer brushes were patterned directly using electron beam lithography to create high resolution patterned polymer brushes in a single step. This method was then used to demonstrate the unique ability to create sub-surface patterns within the brush. Additionally, direct patterning was used to create high resolution patterned binary polymer brushes of PMMA and PEGMA. With this binary patterned surface, a surface that responds to its local environment was created. This thesis also details characterization techniques used in probing polymer thin films to better understand how to improve block copolymer self-assembly. By using a powerful technique called grazing incidence small angle X-ray scattering (GISAXS) on solvent vapor annealed block copolymer thin films while monitoring the solvent vapor swollen film thickness and controlling the film swelling with a nitrogen counterflow, the work presented demonstrates how to accurately determine the processing conditions necessary for the annealing process to take place. This process also provides information as to what changes are occurring during the annealing process. Another characterization technique known as near edge X-ray absorption fine structure (NEXAFS) is also highlighted. A more exact calculation of the electron escape depth (EED) for NEXAFS is done using polymer brushes as the calibration sample. With this information, we can do composition depth profiling on our polymer thin films to identify what is at the surface.