Investigating The Molecular Basis Of Zn And Cd Transport And Homeostasis In The Metal Hyperaccumulating Plant Species, Thlaspi Caerulescens 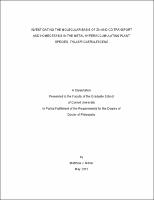 Thlaspi caerulescens (J&C Presl) is a Zn/Cd hyperaccumulator which tolerates Zn and Cd toxic soil environments and accumulates both metals in the shoot to extremely high levels without any toxicity symptoms (30,000 ppm Zn and 12,000 ppm Cd on a leaf dry weight basis). This ability to hyperaccumulate heavy metals has intrigued plant biologists for many years for the possible value T. caerulescens may have in the phytoremediation of Zn- and Cd-contaminated soils. However, it's slow growth and diminished shoot biomass limits its usefulness for phytoremediation. Exploiting the genetic potential of this species by transferring metal hyperaccumulating traits to plants with a higher biomass may be an effective approach to generate new and novel metal accumulator plants. To accomplish this goal, a better understanding of the basic molecular and physiological mechanisms responsible for Zn/Cd hyperaccumulation is needed. Also, because we had previously shown that Zn hyperaccumulation in T. caerulescens is related to the elevated or altered Zn-dependent expression of a number of metal transport and metal-related genes, this plant may serve as a useful tool for studying plant mechanisms of Zn sensing and homeostasis. In an attempt to better understand how the transport of Zn and Cd from the soil to the shoot is altered in metal hyperaccumulators, T. caerulescens was compared in this study to two closely related nonaccumulator plants, Thlaspi arvense and Arabidopsis thaliana. Additionally ecotypic variation within T. caerulescens was exploited. These two approaches were used to identify key proteins involved in Zn and Cd uptake, regulation and sequestration. One component of the research was the functional characterization of the micronutrient transport TcZNT1, which had previously been suggested to be the root Zn/Cd uptake transporter in T. caerulescens. TcZNT1 was characterized in comparison to its closest sequence-based homolog in Arabidopsis, AtZIP4. From this research we obtained findings that TcZNT1 most likely is involved in root Zn uptake from the soil, but also found a possible new role for this transporter in long distance Zn transport based on high levels of TcZNT1 gene expression in the root and leaf vasculature. While it was found that AtZIP4 shares a number of similarities to TcZNT1 with regards to metal transport and tissue-specific expression, we identified a major difference in that AtZIP4 is localized to the chloroplast while TcZNT1 is a plasma membrane transporter. Hence AtZIP4 must play a role in chloroplast micronutrient homeostasis. A second component of the research focused on potential transcriptional regulators of T. caerulescens Zn transporter genes. Using yeast complementation assays, we identified intriguing candidates for this role based on the ability of T. caerulescens transcription factors to activate the expression of a yeast high affinity Zn uptake transporter. These proteins are members of the E2F family of transcription factors that are thought to be involved solely in cell cycle regulation. Here it was shown that one of these TcE2Fs binds with high affinity to a putative E2F element in the TcZNT1 promoter. TcZNT1 is closely related in sequence to the yeast Zn transporter gene that was activated by the TcE2F. However, to date, we have not shown direct activation of TcZNT1 expression by TcE2F2. The final component of this research project exploited natural ecotypic variation in Cd hyperaccumulation between two T. caerulescens ecotypes, and used a comparative transcriptomics approach between these ecotypes to identify a candidate transporter for the enhanced Cd accumulation in the one ecotype. This transporter, TcHMA3, is a member of the P-type ATPase family of metal transporters and was found to be a vacuolar Cd transporter expressed in both the roots and shoots of T. caerulescens. Overexpression of this vacuolar transporter in transgenic Arabidopsis led to increased Cd tolerance and increased root Cd accumulation.