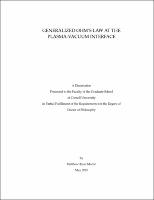 We address the generalized Ohm's law description of current driven plasma flows with finite extent in a vacuum. In pulsed power experiments, initially solid density targets are resistively heated until they form a coronal plasma through surface ablation. The coronal plasma then expands into the vacuum chamber. We show that the resistive MHD approximation does not provide self consistent solutions at low densities near the plasma edge where the electron inertial length is of order the system size. It is shown that the two-fluid model allows for simulation of these plasmas in a consistent and numerically efficient manner, propagating the two-fluid waves where the species' inertial lengths are large and recovering the MHD limit when the species inertial lengths are smaller than the grid spacing. When the two-fluid model is applied to simulating pulsed power loads, the finite electron mass limits current flow near the plasma edge, removing the requirement of resistive MHD to invoke anomalous collisionality as a means to confine current flow to the plasma. The two-fluid model is simplified through introduction of a generalized Ohm's law, and using this model we develop a semi-implicit numerical scheme to advance the generalized Ohm's law system. Our formulation of this system allows for stable integration while taking time steps typical of MHD. Our method avoids the solution of curl-curl differential operator with discontinuous magnetic diffusion coefficient, which is required when an induction equation formulation is applied to problems with a vacuum interface. This is accomplished by includ- ing both finite electron inertia and displacement current in our system of equations while decreasing the speed of light to a few times the fastest velocities of interest. This results in efficient computation of the Hall physics without the computational difficulties of Hall MHD. Additionally, the model allows us to simulate two-fluid physics over previously inaccessible time and space scales, such as those typical of wire array Z-pinches. We use the code to investigate the two-fluid physics of wire arrays, plasma slabs, and magnetic bubbles. Our numerical investigations show that our generalized Ohm's law model predicts flows and instabilities that MHD would otherwise neglect.