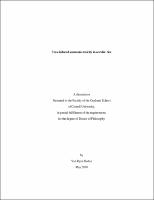 UREA-INDUCED AMMONIA TOXICITY IN AEROBIC RICE Van Ryan Haden Ph.D. Cornell Unive rsity 2010 The production of rice (Oryza sativa L.) consumes a disproportionate amount of the world's freshwater. Aerobic rice is an alternative production system with the potential to help reduce water use. However, for aerobic rice to be a viable option a number of production constraints must still be addressed. Recent studies conducted to optimize nitrogen (N) management in aerobic rice have shown that urea can sometimes have adverse effects on rice emergence and establishment when applied at seeding. Hydrolysis of urea often causes a buildup of ammonia and nitrite that can lead to symptoms of toxicity in various grain crops. Little is known, however, about the susceptibility of rice plants to these chemicals. Chapter 1 reviews the available literature on aerobic rice. It defines the cropping system and then discusses some of the production constraints that have been observed in the system. In particular, we focus on the prevailing N management strategies used in aerobic rice and examine specific problems that may arise when urea is applied in close proximity to recently sown seed. Ammonia and/or nitrite toxicities induced by the hydrolysis of urea are proposed as hypotheses that merit testing in subsequent chapters of the dissertation. Chapter 2 describes two greenhouse experiments that were conducted to test the effects of soil acidification, N source, and N rate on nutrient availability, plant N uptake, and the growth of aerobic rice. Soil from the International Rice Research Institute's long-term aerobic rice experiment (which had gradually become more alkaline over 13 seasons) was placed in pots, treated with seven rates of 0.05 M H2 SO 4 , three rates of either urea or ammonium, and then seeded to aerobic rice. Various plant growth parameters were measured after 45 days. A range of micro- and macronutrient concentrations were determined for both soil and leaf tissue samples. The leaf tissue N concentrations were also used to calculate aboveground N uptake. After adding sulfuric acid, a 5.5-fold increase in soil ammonium and 1.5- fold increase in nitrate was observed. Plant growth and N uptake improved significantly with soil acidification irrespective of N rate and N source. Plants amended with ammonium sulfate outperformed those fertilized with urea but growth differences between the N sources were minimized when soil was acidified prior to planting. These results suggest that acidification can improve N availability and N uptake in aerobic rice. While these experiments could not confirm the occurrence of urea- induced toxicities, the results do provide preliminary evidence consistent with the hypothesis that use of urea can cause ammonia and/or nitrite toxicity which in turn impacts germination and seedling growth. Chapter 3 examines the relative importance of ammonia and/or nitrite toxicities as mechanisms explaining the poor germination and early growth of aerobic rice following urea application. Several greenhouse and incubation studies were conducted to evaluate the effects of N source (urea and ammonium sulfate) and soil pretreatment (e.g. control, acidified or oven-heated) on both ammonia volatilization and nitrite formation as well as their subsequent effects on rice germination and early growth. Ammonia and nitrite were each found to inhibit rice germination when present at high concentrations. Both were also found to accumulate more readily following urea application. However, none of the urea treatments had extractable NO 2 levels above the critical toxicity level of 0.2 g N kg-1 . These results suggest that ammonia toxicity is the primary mechanism by which urea inhibits the germination and establishment of direct-seeded aerobic rice. The final chapter (Chapter 4) provides a framework for assessing the sitespecific risks of ammonia toxicity based on soil properties that influence ammonia volatilization. A four day micro-diffusion incubation using a set of 15 rice soils was carried out to determine which soil properties are the primary drivers of ammonia volatilization and toxicity following urea application. Results from this incubation suggest that the critical level for ammonia toxicity in rice is approximately 8 mg N kg1 . Furthermore, for soils with an initial pH greater than 6.0 the risk of volatilization increased dramatically when clay content was less than 15%, cation exchange capacity (CEC) was less than 10 cmolc kg-1 , and the buffer capacity (BC) was less than 2.5 cmolc kg-1 pH-1 . The overall findings of this dissertation indicate that placement of urea in close proximity to recently sown seed may result in ammonia toxicity in rice cultivated under aerobic conditions. Key symptoms of ammonia toxicity include inhibited germination and poor early growth. Our experiments also show that the risks of ammonia toxicity are highly site-specific with certain soil properties strongly associated with ammonia volatilization and toxicity. Based on these findings we propose a range of ammonia volatilization risk thresholds for properties such as initial pH, CEC, soil texture and BC, which can be used to support management decisions.