A biography of and interview with Linda Dixon Reeve (Peddie) 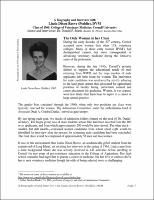 Though Cornell’s College of Veterinary Medicine usually admitted only two women per year during the 1950s and 1960s, Linda Dixon Reeve was the only woman in her veterinary class of 1965. Her interview—she more aptly described it as an inquisition—was typical of the selection process for women in that era. Being a land grant college, Cornell was concerned that students understand the priority placed upon large animal practice, and the interviewing faculty spent a great deal of effort in determining whether candidates’ personal obligations like marriage and family were likely to became a distraction from that priority. Dr. Reeve did, in fact, marry a classmate, James Peddie, and they moved to California following graduation. Much of her career was spent at the Conejo Valley Veterinary Clinic in Thousand Oaks, where she practiced on companion animals as well as a variety of animals (elephants, primates, large cats, and others) used in Hollywood as ‘animal actors’.