The Perils of Pessimism: Predictive effects of negative expectations for future health and education outcomes on adolescent risk behavior 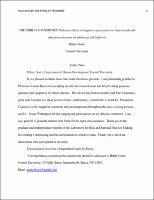 Objective: With data from a longitudinal study conducted by Reyna, I test whether near-fatalistic/negative expectations for the future predict increased adolescent risk behavior over time. In the reverse direction, the effect of behavioral experiences on subsequent expectations was also assessed. Methods: Eight-hundred and seven adolescents (M=15.5 years, SD=1.0) completed a questionnaire that included questions about how far they expected to go in school, their perceived likelihood of getting (a girl) pregnant in the next 6 months, contracting HIV/AIDS, and contracting an STD by age 25. Participants also answered questions about their recent engagement in a range of risk behaviors involving substance use, delinquency and sexual activity. An identical questionnaire was administered at five time points over the course of one year. Longitudinal modeling was used to assess the influence of pre-test expectations on subsequent risk behaviors, and conversely, the effect of pre-test behavioral experiences on subsequent expectations for education and health outcomes. Sociodemographic variables and the criterion at baseline/previous time points were controlled for in all analyses. Results: Results showed variable support for the notion of negative/near-fatalistic expectations as predictors of later risky behavior. A high expectation of teen pregnancy in adolescents proved a marker for involvement in health-jeopardizing behaviors. Pre-test judgments of pregnancy risk significantly predicted increased involvement in later behaviors such as alcohol and drug use, and number of sexual intercourse partners. Reciprocally, these behavioral experiences at pre-test predicted subsequent perceived risk. Pregnancy expectations also significantly predicted increased truancy, unprotected sex, theft and vandalism; these behaviors were not predictive of pregnancy expectations. Predictive effects were not seen as strongly or consistently for expectation measures involving educational (non) attainment, STD contraction and HIV/AIDS infection. Notably, however, expectations for HIV/AIDS infection (both within 6 months and by age 25) predicted smoking and vandalism. There was a positive reciprocal relationship between expectations for STD contraction (by age 25) and number of partners at multiple time points. Risky behaviors tended to predict decreased educational expectations, but not vice versa. Importantly, expectations did not always reflect current involvement in risk behaviors: risky sexual behavior often did not predict increased subsequent expectations for pregnancy, STD and HIV/AIDS contraction. Conclusion: Near-fatalistic expectations for the future do predict increased involvement in subsequent risk behaviors. At-risk individuals may benefit from interventions that promote optimistic orientations for the future, risk-avoidant values, and self-efficacy.

This item removed from eCommons on 2011-09-01 at the request of the author. This item reissued (with a replacement copy supplied by the author) at the author’s request on 2016-02-26. Cornell University Library cannot guarantee that the original and replacement items are identical.