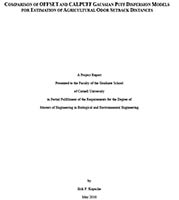 Regulatory criteria for nuisance odor needs firm scientific basis in both frequency and intensity of odors received from a source. OFFSET (Odor From Feedlots – Setback Estimation Tool), a commonly used decision support tool for determining distances between odor-producing agricultural sites and odor sensitive locations, was compared to setbacks calculated by non-steady state Gaussian puff dispersion model CALPUFF. When CALPUFF intensity criteria are modified to reflect shorter odor event durations similar to those used in the derivation of OFFSET, CALPUFF setback distances are much less than that of OFFSET. Results show medians of 1 h averaged CALPUFF setback distances are less by up to a factor of 2.7 than those predicted using OFFSET. Setback distance determination methods need to be correlated with long rage (>1 km) field data in order to determine which method is more accurate and what an appropriate odor event duration is for CALPUFF setback distance determination with greater accuracy than OFFSET.