A biography of and interview with Daniel Skelton 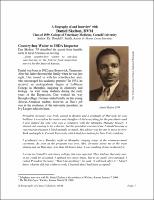 The only African-American in his class and one of the few minority veterinary students in the 1930s, Daniel Skelton joined the Class of 1939 during the depths of the Depression. Born in Tennessee, he had obtained an undergraduate degree from LeMoyne College before moving to New York City to establish State residency that would qualify him for free tuition in Cornell’s land grant system. His fifty-year professional career was with the Bureau of Animal Industry (later APHIS) in meat inspection. Most of this time was in Wichita, Kansas, where he rose to the level of central Kansas circuit supervisor. He has two children and four grandchildren, one of whom is Dr. Debi Thomas, 1980s world champion figure skater and physician. Dr. Skelton turned 97 in September 2009.