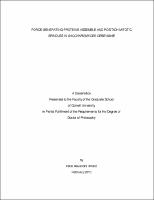 The mitotic spindle is essential for the segregation of chromosomes during cell division. A combination of microtubule motor and non-motor proteins is involved in generating the forces required for mitotic spindle formation and orientation. Loss of Stu1, the Saccharomyces cerevisiae member of the CLASP family of microtubule plus-end-tracking proteins, results in spindle collapse, indicating Stu1 provides an outward spindle-poleseparating force. Similar to Drosophila CLASP, I find that Stu1 contributes an outward force by promoting kinetochore microtubule length either through tubulin subunit incorporation or stabilization. In stu1-5 cells at the restrictive temperature, spindle poles initially separate prior to collapse, indicating that the subsequent establishment of kinetochore-microtubule attachments pulls the poles inward as a result of shortening kinetochore microtubules. Removal of this inward force by disruption of microtubule attachment with the outer kinetochore mutant ndc80-1 restores pole separation. However, pole separation in stu1-5 ndc80-1 is unstable and fails to reach separation distances observed in ndc80-1 alone, indicating that Stu1 may also have a stabilization role at the plus ends of polar microtubules. A genome-wide screen for gene deletions that are lethal in combination with the temperature-sensitive stu1-5 allele identified ldb18!. ldb18! cells exhibit defects in spindle orientation similar to those caused by a block in the dynein pathway. I show that Ldb18 is a component of dynactin, a complex required for dynein activity in yeast and mammalian cells. Ldb18 shares modest sequence and structural homology with the mammalian dynactin component p24. It interacts with dynactin proteins in two-hybrid and coimmunoprecipitation assays. In ldb18! cells, the interaction between Nip100 (p150Glued) and Jnm1 (dynamitin) is diminished while the interaction between Jmn1 and Arp1 is not affected. These results indicate that p24 is required for attachment of the p150Glued arm to dynamitin and the remainder of the dynactin complex. A modified Ldb18 species specifically co-migrates with dynactin complex proteins in sucrose gradients, suggesting regulation is involved in final complex assembly. The genetic interaction of ldb18! with stu1-5 also supports the notion that dynein/dynactin helps to generate a spindle pole separating force.