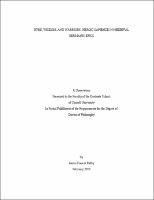 This dissertation examines the nature of wisdom in medieval Germanic epics, and how this wisdom characterizes epic heroes. Germanic heroes of legend and those destined to rule a people or kingdom were expected to be both wise and brave; but the notion of what constituted wisdom was different in each of the three main surviving Germanic languages and cultures of the Middle Ages: Old English, Old Norse, and Middle High German. This dissertation examines the major epics from each of these three linguistic/cultural groups: Beowulf in Old English, Völsunga saga in Old Norse, and the Nibelungenlied in Middle High German. A chapter on Old English and Old Norse sapiential poetry—and its relation to the epics under consideration—is also included. Beowulf demonstrates his wisdom through formal speeches, combative dialogues, provision and reception of counsel, and his proverbial knowledge; but the fundamental aspect of Beowulf’s wisdom is his resignation to fate. Völsunga saga emphasizes Sigurðr’s quests for wisdom, presenting a more complex web of components comprising this wisdom: the ability to question, proverbial and mythological knowledge, the ability to answer or give counsel, and a gift of foresight or prophecy. As in Beowulf, however, the most important component remains resignation to fate. The Old English and Old Norse wisdom poems reflect the notions of wisdom presented in Beowulf and Völsunga saga, but the higher power to which one must resign is expressly God, never wyrd or even death. The interplay of social spheres in the Nibelungenlied influences the expression of heroic wisdom, of which the most important aspect seems the ability to negotiate the complexities of the courtly or mythological worlds. But Hagen, the central figure of wisdom, also demonstrates a fearlessness and resignation to fate and death unparalleled by any other character. While the Nibelungenlied presents different social structures and ideals to Beowulf or Völsunga saga—and therefore different perceptions of wisdom—the significance of resignation in characterizing heroic wisdom remains common to all of these texts.