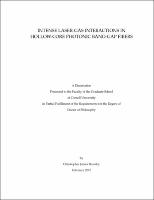 This dissertation presents an experimental investigation of intense laser ﬁeld propagation in hollow-core photonic band-gap ﬁbers (HC-PBGF). The primary aim of this work has been the production of coherent extreme ultraviolet radiation by high-harmonic generation in a gas-ﬁlled ﬁber. The geometric properties of HC-PBGFs have the potential for a dramatic reduction of the pulse energy previously required while the guiding principles should permit enhanced conversion by phase-matching the fundamental and harmonic waves. In this effort we also studied the glass contribution to the nonlinearity of these unique ﬁbers showing the signiﬁcant change that can occur by nanometer scale deviations in the core structure. We also, by careful mode matching to the fundamental ﬁber mode, demonstrated record-low coupling losses which allowed peak intensity transmission nearly an order of magnitude larger than previously observed. To avoid nonlinear effects while coupling into the high-harmonic generating ﬁber and absorption effects when coupling out xenon was introduced by a microchannel drilled through the side of the ﬁber with ultrafast-laser pulses. Though we were unable to observe high harmonic generation signiﬁcant progress was made toward this goal including assembly and optimization of the vacuum chamber, construction of a gas-to-ﬁber delivery system and characterization of our detector by generating third harmonic in a continuous jet of xenon.