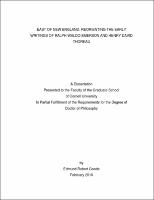 This dissertation offers a new perspective on the writings of Ralph Waldo Emerson and Henry David Thoreau by exploring the Orientalism in their juvenilia and early journals. This study seeks, in part, to restore the polysemy of the term “Orient” to literary criticism of New England Transcendentalism. For Emerson and Thoreau, the Orient was not limited to the culture, people, and texts associated with non-Western lands. The Orient could also evoke the meanings that are encoded within the word itself: the Latin oriens signifying the eastern part of the sky in which the sun rises, as well as daybreak itself. As this study shows, the early Orientalism of Emerson and Thoreau reflects their attempts, through reading and writing about the East, to resist the unthinking, uncritical reproduction of Western European cultural forms, expectations, and traditions. From the late-1810s to the 1840s, Emerson’s largely defined his Orientalism against the example of the British, with their desire to subject South Asia to the British Crown. Emerson yearned to be a literary voice of America’s incipient empire, and he excitedly took up the so-called “Oriental theme” as a kind of literary apprenticeship, even a rite of passage, testing his hand as an essayist and poet in his submissions for prizes at Harvard College and in his private journals. Thoreau’s emergent Orientalism can be charted in his journals from 1837 to 1841, as he reflects on his vocational concerns, as well as nature, time, textuality, and consciousness. Through experiments in cognition and composition, Thoreau attempts to “reorient” himself around repeated encounters with natural phenomena, such as the tree-lined horizon or the depths of Walden Pond, and in doing so, reveals one of the central activities of his Orientalism: to achieve a paradoxical perspective where he could simultaneously see a thing and its opposite.