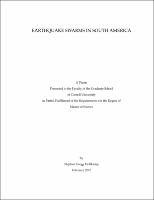 For this thesis, we performed a manual search for earthquake swarms in South America using the PDE catalog. We chose to perform a manual search because global catalogs are deficient in lower magnitude events and have a potentially low number of events per swarm. With our technique we aim to be insensitive to spatial scales, temporal scales and particularly the number of earthquakes in the potential swarms since seismicity rates vary greatly over the South American continent. However, with a manual search we sacrifice a rigorous approach for one that requires individual interpretation. We identify 35 possible swarms of varying spatial scales and tectonic locations with this search. For most of the events, discussion is limited to several implications about broader tectonic processes due to the lack of additional or higher resolution data (e.g. GPS, InSAR, local seismic catalogs). Several of the events have geodetic data available and for those cases we process and model surface deformation for various slip models and stress changes for earthquake interaction. Two swarms are examined in detail and do not show or are inconclusive for aseismic slip. Seismicity that appears to have been triggered by the Mw=8.5 2001 Peru earthquake is examined and shows that static changes in the Coulomb stress field did not trigger the events, indicating that some dynamic triggering process may have been responsible. We provide evidence that earthquake swarms show a strong degree of interaction with megathrust events by preceding and even marking the limits of large earthquake rupture propagation, showing evidence of stress interaction with megathrust events, and occurring in areas of long standing seismic gaps. We show that swarms commonly occur at the subduction of aseismic ridges and that there may be a potential interaction between swarm locations and trench parallel gravity anomalies. The catalog produced in this thesis appears to agree with previously determined magnitude-frequency scaling laws as well as potentially agreeing with moment-duration scaling laws. Although few volcanic swarms were found, we explore a possible relationship between swarm magnitudes, the frequency of eruption, and temperature of the volcano.