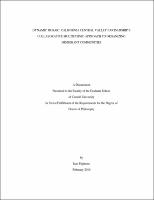 What’s in focus here is how marginalized, unrecognized and diverse groups of immigrants within a setting of great contradictions can be energized to develop their communities The setting is the Central Valley of California, the richest agricultural region in the world stretching 450 miles in the heartland of the state. Within this productive region lie 58 incorporated cities of California, with the majority of them ranking among the poorest cities of nearly 500 in the state. The communities in question are very diverse and made up of refugees, immigrants, migrant farm laborers, low income workers from all over the world. They speak numerous indigenous languages from the state of Oaxaca, Mexico, the mountainous pockets of Laos, countries from other regions such as Armenia in the former Soviet Union, Liberia in West Africa and El Salvador in Central America. The Central Valley Partnership for Citizenship (CVP), formed by melding community based organizations who had worked independently on various issues facing Central Valley communities, led to numerous creative collaborations. These included the creation of the Civic Action Network, involving 149 emerging immigrant and low income worker organizations, developing a leadership training program for immigrant communities, training youth in research resulting in action and organizing the Tamejavi festival that celebrates the creative contributions immigrants can make to . the Central Valley. How these collaborative efforts were brought about is discussed in the ensuing chapters. The CVP was designed as a l0 year project which accomplished much in mobilizing communities but fell short of developing into a sustainable organization to continue the creative approaches to community development. The final chapter summarizes the lessons in community organizing and development offered by the CVP experience. The concluding analysis revolves around questions concerning clarity of goals, dependence and sustainability pertaining to community development approaches. .