The Emissions Of Nitrous Oxide From Agricultural Fields In New York State: Effect Of Fertilization And Analysis Of Temporal And Spatial Variability 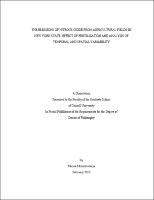 The atmospheric nitrous oxide (N2O) is of special interest, due to its persistent effect as a potent greenhouse gas and stratospheric ozone destructor. Animal manure fertilization is one of the key factors contributing to N2O formation. In the Northeastern US, dairy industry is the largest agricultural activity, and the manure cropland fertilization is a common practice. Continuous monitoring of N2O emissions from croplands in New York State was conducted by eddy covariance method from 2006 to 2009. The research was aimed at quantification of N2O emissions from manure-fertilized corn (Zea mays) and alfalfa (Medicago sativa) fields, estimating strength and spatial variability of soil N2O sources by conducting simultaneous static chamber campaign, and analysis of temporal distribution of N2O fluxes as affected by seasonality of climate variations and manure practices. The analysis of cumulative N2O emissions and source contributions into the integrated flux showed that manure nitrogen (N) was the most important factor controlling the extent of N2O formation: areas which received more manure N were stronger N2O emitters. Whereas N availability determined a magnitude of N2O emissions, the environmental changes altering soil moisture and temperature status were major N2O event triggers. The temporal flux distribution demonstrated episodic event-induced nature of N2O peak fluxes, which were primarily driven by strong rainfall and warm temperatures in growing season and soil thaw in winter and early spring. The greatest N2O emissions were observed when flux-triggering weather events coincided with or followed manure application. The most intense single N2O peak event was produced from combination of summer manure spreading and strong rainfall; however spring thaw-induced N2O fluxes showed more consistent seasonal year-to-year trend. The daily average fluxes measured by the EC and chamber techniques were in good agreement. The spatial variability of chamber measurements was mainly caused by high heterogeneity of soil N2O formation, which resulted both in net N2O production and consumption. The EC integrated flux was strongly dependent on wind direction and contributing footprint. The combination of the two different scale methods may help in reducing temporal and spatial variability of N2O estimates and improving N2O emission data quality. .