Cleaners And The Mobilization Of Communities: The 2006 Justice For Janitors Campaign At The University Of Miami 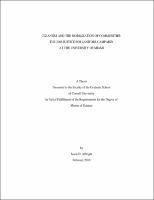 This thesis narrates the history of the University of Miami Justice for Janitors campaign of 2006 as a local movement disclosing the immanent contradictions of the financial expansion ongoing in the capitalist 'world-system' since the 1980s and manifest in the financial crisis of 2008. Involving janitors, university students, faculty, clergy, union leaders and the local activist community in a nine-week struggle that culminated in a theologically resonant hunger strike and an ultimate union contract for the workers, the campaign introduced a new dynamic of collective resistance into Miami's civil society, including novel institutions and discursive forms. The thesis views the campaign as an individual lens on, and instance of, the contemporary regime of capitalist accumulation, using event-level history to focus on a set of concrete efforts at resistance that both flowed from and locally modified the advancement of neo-liberal social policies in the city. The central argument is that the campaign laid potential foundations for a novel historical bloc in Miami by creating a loosely-networked community of actors committed to a social wage, embedded in specific relations of the market society, rooted in deep connections to material life, and capable of exercising political influence vis-a-vis elite actors. Drawing upon Christian symbolism, clerical support, and the initiative of workers in pursuing a three-week hunger strike, the campaign built up a broadly Catholic community of faith to disclose a conflict between the exigencies of material life and the commandments of capitalist instrumentality. Its discourse and practice opened up possibilities not only for better wages, benefits and working conditions for the janitors but also for new shared conceptualizations of the meaning of the campus space as locus for the unfolding possibilities of time.