Securing Okinawa for Miscegenation: A Historical and Literary Discourse Analysis of Amerasians in Okinawa, 1945-2000 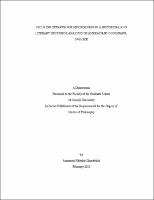 Through an extensive collection of journalistic, archival, and literary materials, I illustrate the establishment, maintenance, and controversy surrounding miscegenation between U.S. military men and Okinawan women specifically from the standpoint of Amerasians that were born as a result thereof. As Okinawans were exposed to the raw violence of extraterritoriality of the U.S. military—most frequently expressed through the trope of sexual violence—an escape from that violence was quickly configured as a recuperation or increased protection of state sovereignty. In this way, journalists, politicians, and activists have frequently used mixed-blood children as the “evidence” in a juridical model to prove the “fact” of oppression. However, in a declension into biopolitics via three genealogists Nietzsche, Weber, and Foucault, I illustrate the assumptions implicit in this claim. The state is posited as a repressive institution that a political group known as “we” must resist. Here, metaphor is misconceived as the relationship between the state as an external force that exerts violence onto individual bodies that are in turn called to arms in the name of resistance. However, this rests on a causal understanding between the doer and the deed, or a political will that can be realized through sheer tenacity. Instead, I show through Nietzsche how this function of metaphor is repressed to give rise to the fiction of a causal agent. Furthermore, I inflect my reading of metaphor with biopolitics through Esposito’s account of Nietzsche. That is, the state is not merely the repressive power that threatens life, but it must be articulated in conjunction with the power to secure life. The biopolitical state is concerned with the life of the population at large and the power of the state becomes literally infused through the veins of human bodies. This dissertation gambles with the hope of dislodging Amerasians from a damning biopolitical dilemma: seeds of destruction of a genocidal rape (of women as victims) that must be contained to secure the Okinawan population at large or Amerasians as the embodiment of the “success” of Okinawa’s ability to secure entry into a liberalized global economy (via the bodies of women as free-willing agents).