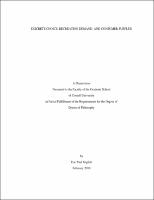 Three topics are examined using discrete choice models to estimate demand and consumer surplus for recreation trips. The first topic involves recreation nonparticipation and the choice to participate in a recreational activity. In recreation demand models that examine the general population, nonparticipation is usually estimated as the probability mass on zero demand given a positive level of expected demand and a discrete distribution of demand outcomes. Researchers have attempted to improve predictions of nonparticipation by modifying the parameters of the demand distribution. This study departs from previous approaches by explicitly incorporating nonparticipation into the behavioral model. The choice to participate is described by a distribution of preferences combined with a choke price on individual demands to distinguish participants from nonparticipants. The model is applied to a recreational activity in South Carolina called shrimp baiting and is found to accurately predict nonparticipation and the size of the user group. The second topic involves the estimating recreation demand models that account for fixed annual recreation fees. Models of recreation behavior have typically ignored the role of fixed annual fees, such as the fee for a recreational license, in determining choice and welfare. The second study demonstrates how techniques from the literature on discrete-continuous choice and two-part tariffs can address a situation where fixed annual fees are essential to determining the choice of a recreation site. Accounting for value captured by fixed fees can influence the way resource changes are assessed. The third study proposes a new way to incorporate income effects in logit models with repeated choices. The repeated-logit specification, commonly viewed as a series of independent discrete choices, is instead viewed as a system of continuous demand equations. In the demand-system context, repeated logit satisfies integrability conditions for the existence of an underlying utility function while retaining desirable modeling properties such as allowing for income effects together with Marshallian cross-price effects. Relative to previous welfare measures for repeated logit, the proposed approach overcomes the problem of independent choice occasions and permits the computation of theoretically supported Hicksian welfare measures.