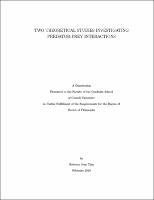 This thesis consists of two projects looking at diﬀerent aspects of predatorprey relationships. The ﬁrst project examines this relationship in the context of predator-prey coevolution and assumes that the cost for prey defense is variable. The second project looks at ecosystem shifts in the 1990s in the Gulf of Maine and the relative role of top-down verses bottom-up processes on controlling Calanus ﬁnmarchicus abundance. Predator-Prey Coevolution Predation can act as a selective pressure which drives prey to adapt a defensive trait to avoid attack. At the same time, predators can evolve a counter-defense which aids them in continued successful attacks. Allocation towards either trait can be costly, in the form of a decrease in fecundity. There is some evidence to suggest that, for the prey at least, cost can vary depending on the level of intraspeciﬁc competition. Here we investigated the eﬀects of variable prey trait cost and genetic variability of the predator and prey, on the stability and dynamics of the system. We compared two models, one which assumed that cost of prey defense is ﬁxed, and one that assumed that cost varies proportional to population density. We found that under most conditions, variable cost of prey defense is more stabilizing to the interaction than ﬁxed cost. Gulf of Maine Ecosystem In the Gulf of Maine in the 1990s an increase in freshwater was associated with increased phytoplankton blooms, particularly in autumn. This in turn led to increased abundance in most copepods. Calanus ﬁnmarchicus, one of the most abundant zooplankton species in the region, demonstrated an increase in abundance in the earlier developmental stages but a paradoxical decrease in abundance of the later copepodid stages. At the same time, adult herring, which preferentially feed on late-stage C. ﬁnmarchicus, increased in abundance by one order of magnitude. Through ordinary diﬀerential equation models, we investigated whether increased presence of herring in the 1990s was large enough to contribute to the decline in late-stage C. ﬁnmarchicus. Additionally, we incorporated food-dependent growth into the later copepodid classes to investigate the impact of phytoplankton variation on the observed shifts in zooplankton abundance.