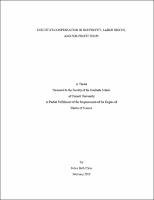 Organic materials are currently being examined for their potential use as active conducting media in electronic devices. Computational methods were used to study the transport characteristics across single organic molecules and through organic molecular crystals as well as the possibility of chemical impurities in crystals. In particular, the dependence of conductance on the central dihedral angle of single molecule junctions containing 4,4'-diaminobipenyl derivatives was probed by combining electronic structure calculations with a tunneling model and comparing to experimental results from literature. The calculations and model were adequate in reproducing the trend observed in experiment, implying that the differences in conductance across this class of molecules can be attributed mainly to the central dihedral angle. A method for calculating hole mobilities in organic molecular crystals at room temperature was considered for crystals of pentacene, tetracene, and anthracene. Computed mobilities were found to have a sensitive dependence on the calculated parameters and to insufﬁciently predict mobility trends across the materials. Impurities of water molecules in surface vacancy defects of pentacene crystals were studied through the use of molecular dynamics. Water molecules were found to bind to these defects, which has implications for charge transport through pentacene crystals.