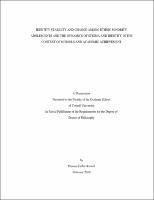 A range of conceptual models exist relating to stigma and identity. However, only recently have simultaneous advancements in both design and analytic strategy made it possible to test these dynamic multifaceted theories. Capitalizing on person-centered, repeated measures designs and multilevel analytic strategies, this dissertation examines factors influencing changes in identity over time, and explores the dynamics of stigma and identity in the context of schools and academic achievement. Study 1 considers the effects of discrimination and national identity on trajectories of ethnic identity among Latino college students. Findings from this study suggest that discrimination is positively associated with changes in ethnic identity among students with a weaker national identity, but negatively associated with ethnic identity among students with a stronger national identity. Furthermore, a main effect was also observed such that national identity was associated with greater increases in ethnic identity over time. Study 2 considers the election of Barack Obama as a discrete event influencing the racial identity of African American college students. Findings from this study indicate that the election stimulated identity exploration and had important immediate and longer-term influences on racial identity. Furthermore, identity exploration immediately following the election was an important predictor of longer term identity change. Study 3 addresses a foundation question relating to stigma and identity in school contexts by exploring the longitudinal association between academic achievement and social acceptance across ethnic groups in a nationally representative sample of adolescents. Results show that African American and Native American adolescents experience greater social costs with academic success than Whites. Pertaining to school context, findings suggest that the differential social consequences of achievement experienced by African Americans are greatest in more highly achieving schools, but only when these schools have a smaller percentage of Black students. Students from Mexican decent also showed differential social costs with achievement in particular school contexts. This study provides a reminder that racial dynamics are important within schools and should not be ignored.