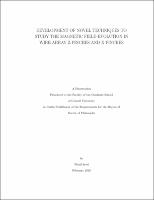 Understanding the magnetic ﬁeld topology in wire-array Z-pinches is of great signiﬁcance for their ultimate application to stockpile stewardship and inertial conﬁnement fusion. We have developed and tested several novel techniques involving material-based sensors to measure magnetic ﬁelds as a function of space and time in high energy density plasmas on pulsed power machines. We ﬁrst brieﬂy introduce a technique that was used to measure a lower limit of the maximum magnetic ﬁeld of a sub-microsecond duration pulse using magnetic reversal in CoPt thin ﬁlms. The time-varying magnetic ﬁeld was generated by an exploding wire array plasma called an X pinch produced on the 0.5 MA, 100 ns pulse duration, XP pulsed power generator. We then introduce a technique based on Faraday rotation that was used to measure magnetic ﬁelds in wire-array Z-pinches produced on the 1 MA, 100 ns rise time, COBRA pulsed power generator as well as on the XP generator. This technique measures magnetic ﬁelds as a function of space and time using Faraday rotation of a single longitudinal mode (SLM) laser through a magneto-optically active bulk waveguide, multicomponent terbium borate glass, placed adjacent to, or within, the wire array. We have measured ﬁelds > 10 T with 100 ns rise times outside of a wire-array Z-pinch for the entire duration (∼250 ns) of the current pulse and as much as ∼2 T inside a wire-array for ∼40 ns from the start of current. This is the ﬁrst time that such rapidly varying and large ﬁelds have been measured using the terbium borate glass. The third method, also based on Faraday rotation of SLM laser light utilized an integrated optical ﬁber sensor (a ﬁber-sensor-ﬁber assembly) on the XP pulsed power generator that also yielded a measurement of the magnetic ﬁeld of a wire-array Z-pinch for part of the current pulse. Finally, we repeated the third method by fabricating a “thin ﬁlm waveguide” of terbium borate glass to increase the spatial resolution of the measurement. The thin ﬁlm waveguide was then coupled to an optical ﬁber system. Although we successfully fabricated thin ﬁlm nanowaveguides of terbium borate glass, the ﬁrst time such waveguides have been made, due to poor coupling eﬃciency of light between components, preliminary Faraday rotation measurements were unsuccessful. The technique developed in this dissertation is potentially viable for magnetic ﬁeld measurements in high current pulsed power systems if the device is protected from intimate interaction with the high energy density plasma during the time that a magnetic ﬁeld measurement is to be made.