Taking A Molecular Approach To A Clinical Problem: Sperm Capacitation As The Missing Link For Successful In Vitro Fertilization In The Horse 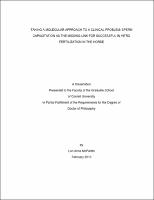 Ejaculated mammalian sperm must reside within the female reproductive tract for a finite period of time before acquiring the ability to fertilize an oocyte. The complex biochemical and physiological changes that occur during this process are collectively termed „capacitation‟. Capacitation comprises the molecular events that prepare the sperm for acrosomal exocytosis and a change in the pattern of flagellar motility called hyperactivation. Both of these processes are required for fertilization. In several domestic and laboratory species, as well as in humans, these events can be recapitulated in the laboratory by incubating sperm in a defined medium. Two in vitro markers of capacitation include time dependent increases in protein tyrosine phosphorylation and high rates of agonistinduced acrosomal exocytosis. In contrast to other species, capacitation of stallion sperm has been extremely difficult to achieve with inconsistent results reported between and within laboratories. Moreover, despite numerous attempts, only two foals have ever been produced via in vitro fertilization (IVF) technology. Evidence suggests that this is ultimately due to the inability to appropriately capacitate stallion sperm in the laboratory. Therefore, the objectives of this research were to define and characterize: 1) the incubation conditions that supported capacitation of stallion sperm, as evidenced by increases in protein tyrosine phosphorylation and agonist-induced acrosomal exocytosis; 2) the molecular pathways involved in both of these capacitation-dependent events; 3) the motion parameters associated with hyperactivated motility; and 4) the incubation conditions that supported successful in vitro fertilization of mare oocytes. We determined that incubation of stallion sperm in modified Whitten‟s containing 25 mM sodium bicarbonate and 7 mg/ml BSA supported significant time-dependent increases in protein tyrosine phosphorylation and significant percentages of progesterone-induced acrosomal exocytosis. We also demonstrated that the serine/threonine kinase protein kinase A (PKA) plays a critical role in the protein tyrosine phosphorylation pathway and that the guanine nucleotide exchange factor EPAC plays a role in acrosomal exocytosis. Moreover, by characterizing the motion parameters associated with procaine-induced hyperactivation in stallion sperm in juxtaposition with our capacitating conditions, we were able to achieve 60.7% in vitro fertilization rates of mare oocytes (0-30% previously reported).