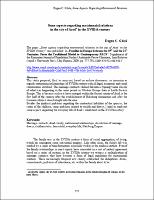 This study proposed, first, to carry out, based on archive documents, an incursion as regards matrimonial relationships of XVIIIth century with all legal, economic and social connotations involved. The marriage contracts studied fall into a typology more closely of what was happening in the same period in Western Europe than in South Eastern Europe. This is because such acts have emerged within the former county of Arad in the first half of the century after the establishment of Habsburg domination and after the German colonists were brought into the area. Besides the juridical problems regarding the contractual liabilities of the spouses, the status of the children, some problems related to wealth and dowry, I tried to mark out some aspects regarding the everyday life of Arad’s inhabitants in the XVIIIth century.

„Families in Europe between the 19th and the 21st Centuries. From the Traditional Model to Contemporary PACS”. Supplement of the Romanian Journal of Population Studies/ Antoinette Fauve-Chamoux, Ioan Bolovan (coord.). University Press, Cluj-Napoca, 2009, pp. 777-791.