A biography of and interview about Clarence R. Roberts 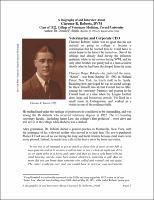 Clarence R. Roberts went from general veterinary practitioner in rural New York State to chief executive officer of a major dairy corporation. He received his DVM degree from Cornell University in 1922 when tuberculosis was still a prevalent disease transmitted to people drinking unpasteurized milk from infected cows. To provide for his growing family, Roberts accepted a position with Sheffield Farms Company where he examined dairy cattle and milking facilities from farms that supplied milk for human consumption. In 1929, he was promoted to a management position in New York City. He continued moving up the corporate ladder, first as President of Sheffield Farms, and eventually becoming CEO of Sealtest Foods, the milk and ice cream division of National Dairy Corporation, where he supervised 20,000 people. Though required to retire at age 65, he remained active in local activities and Cornell alumni affairs until his death in his 100th year. Dr. and Mrs. Roberts have three children, including Dr. Kent Roberts, also a veterinarian.