A biography of and interview with Clarence F. Bent 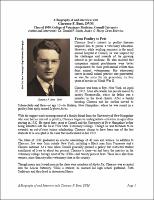 Clarence Bent was one of six students in the Cornell DVM Class of 1939 not from New York State. He was raised on a poultry farm in New Hampshire and attended the UNH before matriculating in veterinary medicine at Cornell in 1935. His first job after graduation was at the Rowley Memorial Animal Hospital in Springfield, Massachusetts, a branch of Boston’s renowned Angell Memorial Hospital. Here Dr. Bent developed his small animal medical skills before starting his own veterinary practice in New Hampshire. He was deployed as a commissioned officer of the U.S. Army Veterinary Corps following the attack on Pearl Harbor. He fulfilled his war service as meat inspector, first in Massachusetts, then in Papua New Guinea and the Philippines. Following the war, he opened a small animal clinic in Nashua, New Hampshire. He served as president of the New Hampshire Veterinary Association. He retired in 1974 and currently lives in Derry in the home of one of his two children.