Nonlinear spin-up of a thermally stratified fluid in cylindrical geometries 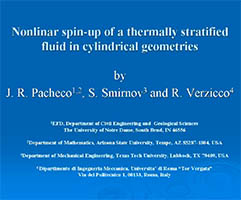 This is an entry for the Gallery of Fluid Motion of the 62nd Annual Meeting of the APS-DFD (fluid dynamics videos). This video shows the three-dimensional time-de\-pen\-dent incremental spin-up of a thermally stratified fluid in a cylinder and in an annulus. The rigid bottom/side wall(s) are non-slip, and the upper surface is stress-free. All the surfaces are thermally insulated. The working fluid is water characterized by the kinematic viscosity $\nu$ and thermal diffusivity $\kappa$. Initially, the fluid temperature varies linearly with height and is characterized by a constant buoyancy frequency $N$, which is proportional to the density gradient. The system undergoes an abrupt change in the rotation rate from its initial value $\Omega_i $, when the fluid is in a solid-body rotation state, to the final value $\Omega_f$. Our study reveals a feasibility for transition from an axisymmetric initial circulation to non-axisymmetric flow patterns at late spin-up times.

This fluid dynamics video shows the baroclinic instability of the flow evolving in time due to an abrupt change of the rotation rate of the cylinder/annulus from different perspectives in space. Our simulations revealed that azimuthal asymmetry is manifested in the form of cyclonic and anticyclonic columnar eddies, which develop at the temperature front formed by the highly distorted isotherms near the cylinder sidewalls. Strong deformation of the initial temperature field is caused by the Ekman transport near the bottom. The front steepens until it reaches a quasi-equilibrium state. The eddies grow in size and march along the outer wall until they occupy a large portion of the tank.