Large-eddy simulations of Richtmyer-Meshkov instability in a converging geometry 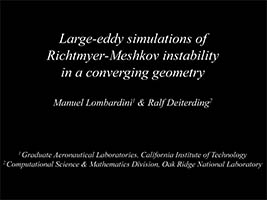 The Richtmyer-Meshkov instability (RMI) refers to the baroclinic generation of vorticity at a perturbed density interface when impacted by a shock wave. It is often thought of as the impulsive limit of the Rayleigh-Taylor instability (RTI). The fluid dynamics video "large-eddy simulations (LES) of RMI in a converging geometry" shows the mixing of materials resulting from the interaction of an imploding cylindrical shock wave with a concentric perturbed interface that separates outside light gas from heavy gas (initially 5 times denser) inside a wedge. At the initial impact, the incident shock Mach number is either 1.3 or 2.0. The present canonical simulations support recent interests on compressible turbulent mixing in converging geometries relevant to both inertial confinement fusion and core-collapse supernovae dynamics.