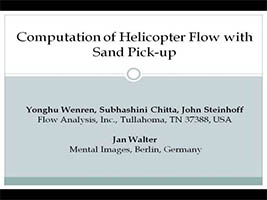 Accurate prediction of rotorcraft flow fields for brownout, computed using an incompressible flow solver SAGE with Vorticity Confinement, is demonstrated in our fluid dynamics video. The main problem addressed here is the simulation of effects of particulate pick-up during rotorcraft landing maneuvers, which can lead to very dangerous conditions, such as loss of visibility. This technical problem requires rapid, accurate prediction of rotorcraft flow fields in ground effect, including particulate pickup and transport, and its effects on pilot visibility (such as brownout from sand). Solution of this problem will give engineers a simulation tool with which they can develop landing descent trajectories and pilot training techniques that minimize these problems.

The computations of flow over an entire helicopter configuration, including main rotor and tail rotor, are performed on a uniform Cartesian grid. The rotor blades are represented by very efficient lifting lines using a simple momentum source representation together with the Flow Analysis Vorticity-Confinement-based flow solver. A particulate convection model, used to accommodate particles with mass and drag, and an entrainment module, capable of modeling different entrainment phenomena related to sand, snow, and other particulates are used for the computation. Visualization of the vorticity magnitude using advanced rendering is seen to be a very effective way to represent the flow field. The rendering using the package “Mental Ray” from Mental Images is seen to be a very effective, efficient means to visualize the flows in a realistic manner, and at a computational cost comparable to the actual, very efficient, flow computation. SAGE operates on uniform, coarse Cartesian grids. As a result, the flow solver algorithm does not require computations of grid metrics. The use of uniform Cartesian grids allows FFT-based Poisson solvers to be used, which is the most efficient approach known. Since most of the computational time is spent in the Poisson solution, the SAGE implementation is very efficient. In addition, the implementation accommodates the use of multiple embedded Cartesian meshes. Flows over complex configurations are computed by immersing the surface description of the configuration in the Cartesian. The ability to immerse solid surfaces within the Cartesian grid is of critical importance to this study. This represents a very simple, economical way to treat complex bodies since it does not require body conforming or adaptive grid generation and can use a fast Cartesian grid set-up and flow solver. Different helicopter and rotor configurations can be rapidly implemented without the time-consuming and tedious grid generation efforts required by other approaches.