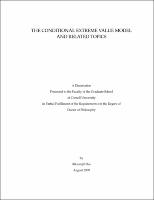 Extreme value theory (EVT) is often used to model environmental, financial and internet traffic data. Multivariate EVT assumes a multivariate domain of attraction condition for the distribution of a random vector necessitating that each component satisfy a marginal domain of attraction condition. Heffernan and Tawn [2004] and Heffernan and Resnick [2007] developed an approximation to the joint distribution of the random vector by conditioning on one of the components being in an extreme value domain. The usual method of analysis using multivariate extreme value theory often is not helpful either because of asymptotic independence or due to one component of the observation vector not being in a domain of attraction. These defects can be addressed by using the conditional extreme value model. This thesis primarily concentrates on various aspects of this conditional extreme value model. Prior work left unresolved the consistency of different models obtained by conditioning on different components being extreme and we provide understanding of this issue. We also clarify the relationship between the conditional distributions and multivariate extreme value theory and extensions from one to the other. An important model issue is whether the limit measure in the conditional model is a product as this leads to a dichotomy in estimation of the model parameters. We propose three statistics which act as tools to detect the plausibility of using this model as well as whether the limit measure is a product or not. This thesis also considers a graphical tool which has been in use for quite some time. The QQ plot is a commonly used technique for informally deciding whether a univariate random sample of size n comes from a specified distribution F . The QQ plot graphs the sample quantiles against the theoretical quantiles of F and then a visual check is made to see whether or not the points are close to a straight line. We consider the set S n of points forming the QQ plot as a random closed set in R2 . We show that under mild regularity conditions on the distribution F , S n converges in probability to a closed, non-random set. In the heavy tailed case where 1-F is a regularly varying function, a similar result can be shown but a modification is necessary to provide a statistically sensible result since typically F is not completely known. This final technique is also used to marginally detect heavy-tails in the conditional extreme value model