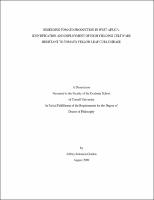 First identified in the Middle East in the 1930s, Tomato Yellow Leaf Curl Disease (TYLCD) is a whitefly-vectored viral disease of tomato that has spread rapidly throughout the world in the last two decades and is now one of the most serious constraints to tomato production worldwide. Significant efforts have been invested in its control, resulting in the development of numerous techniques and resistant cultivars that have minimized the disease's impact wherever they are deployed. However, lack of access to agricultural inputs in developing regions such as West Africa has delayed the adoption of effective TYLCD control methods, leading to stagnant or volatile tomato yields. As demand for tomatoes has increased among West Africa's growing urban population, imports of canned tomatoes have skyrocketed, demonstrating the potential for a viable West African tomato processing industry but highlighting the need for the higher and more consistent yields required for a cannery to be profitable. This dissertation describes a project in which a multinational, highly collaborative germplasm trialing network has been established in West Africa to identify vegetable cultivars well-adapted to the region and to mobilize those varieties into local seed distribution networks. Research partners in seven countries have evaluated 70 cultivars from both public and commercial breeding programs over the course of three years, focusing on TYLCD resistance, yield, and fruit quality. Currently, efforts are underway to distribute seeds of the most successful cultivars to farmers in West Africa.