Essays On The Specification Testing For Dynamic Asset Pricing Models 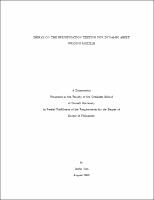 This dissertation consists of three essays on the subjects of specification testing on dynamic asset pricing models. In the first essay (with Yongmiao Hong), "A Simulation Test for ContinuousTime Models", we propose a simulation method to implement Hong and Li's (2005) s transition density-based test for continuous-time models. The idea is to simulate a sequence of dynamic probability integral transforms, which is the key ingredient of Hong and Li's (2005) test. The proposed procedure is generally applicable s whether or not the transition density of a continuous-time model has a closed form and is simple and computationally inexpensive. A Monte Carlo study shows that the proposed simulation test has very similar sizes and powers to the original Hong and Li's (2005) test. Furthermore, the performance of the simulation test s is robust to the choice of the number of simulation iterations and the number of discretization steps between adjacent observations. In the second essay (with Yongmiao Hong), "A Specification Test for Stock Return Models", we propose a simulation-based specification testing method applicable to stochastic volatility models, based on Hong and Li (2005) and Johannes et al. (2008). We approximate a dynamic probability integral transform in Hong and Li's s (2005) density forecasting test, via the particle filters proposed by Johannes et al. (2008). With the proposed testing method, we conduct a comprehensive empirical study on some popular stock return models, such as the GARCH and stochastic volatility models, using the S&P 500 index returns. Our empirical analysis shows that all models are misspecified in terms of density forecast. Among models considered, however, the stochastic volatility models perform relatively well in both in- and out-of-sample. We also find that modeling the leverage effect provides a substantial improvement in the log stochastic volatility models. Our value-at-risk performance analysis results also support stochastic volatility models rather than GARCH models. In the third essay (with Yongmiao Hong), "Option Pricing and Density Forecast Performances of the Affine Jump Diffusion Models: the Role of Time-Varying Jump Risk Premia", we investigate out-of-sample option pricing and density forecast performances for the a¢ ne jump diffusion (AJD) models, using the S&P 500 stock index and the associated option contracts. In particular, we examine the role of time-varying jump risk premia in the AJD specifications. For comparison purposes, nonlinear asymmetric GARCH models are also considered. To evaluate density forecasting performances, we extend Hong and Li's (2005) specification s testing method to be applicable to the famous AJD class of models, whether or not model-implied spot volatilities are available. For either case, we develop (i) the Fourier inversion of the closed-form conditional characteristic function and (ii) the Monte Carlo integration based on the particle filters proposed by Johannes et al. (2008). Our empirical analysis shows strong evidence in favor of time-varying jump risk premia in pricing cross-sectional options over time. However, for density forecasting performances, we could not find an AJD specification that successfully reconcile the dynamics implied by both time-series and options data.