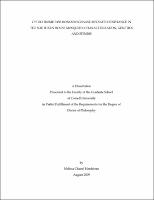 Mosquitoes vector a multitude of deadly and debilitating pathogens that present serious threats to the health of humans and animals. Insecticides are often the only feasible method of controlling disease vectoring mosquitoes in endemic areas and during epidemic outbreaks. Pyrethroids are the primary insecticide class used on bed nets and for indoor residual spraying. Worldwide, permethrin resistant populations of Culex pipiens quinquefasciatus have been recorded. The two major mechanisms of resistance to permethrin are cytochrome P450 monooxygenase-mediated detoxification and a mutation (kdr) which renders the targeted voltage-sensitive sodium channel protein insensitive. Despite the importance of P450 detoxification, little is known. This study has characterized the P450 mechanism, investigated interactions with kdr, examined fitness associated with P450-mediated resistance and confirmed the probable P450 gene responsible for resistance. Understanding the complexity of P450 resistance is essential for determining how control programs will affect mosquito populations. The ISOP450 strain of Cx. p. quinquefasciatus was isolated through backcrossing permethrin-resistant JPAL into an SLAB (susceptible) genetic background. Resistance in ISOP450 was conferred exclusively by P450 detoxification in a larval-specific manner (1,300-fold relative resistance). P450 detoxification in ISOP450 was only able to readily detoxify permethrin and bioactivated temephos. Analysis of the inheritance pattern revealed that P450 detoxification was incompletely dominant and monofactorial. Interactions of P450 detoxification with kdr were determined by deducing the permethrin resistance contribution for each mechanism in various genotypic states. The interactions among all genotype combinations were multiplicative. In Culex colonies segregating for P450 resistance and maintained in an insecticide-free environment, the P450 resistance allele decreased slightly but not significantly over time. A heterozygote advantage was observed in the cold temperature environment and the resistance allele significantly decreased in the temephos exposed environment. Biological estimates of fitness showed no parameter to be associated with P450 detoxification. Therefore, a large fitness cost is not associated with the detoxification mechanism under insecticide-free laboratory conditions. CYP9M10 was determined to be over-expressed by 2,200-fold and 12-fold in ISOP450 larvae and adults, respectively, compared to SLAB. Polymorphic sites which differentiated the resistant and susceptible CYP9M10 alleles were determined, providing a possible molecular monitoring tool for assessing P450-mediated resistance.