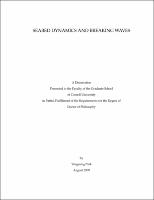 The dynamics of the sea bottom boundary and the free surface breaking in the coastal areas have been studied. For each of the studied topics, theoretical analysis is supported by careful laboratory experiments as well as numerical simulations. In the first part, the dynamics of the bottom boundary with various rheological properties has been examined within the framework of the boundary layer theory. Experimental measurements on the laminar boundary layer flows under a long wave clearly proved the validity of the theory. In particular, a flow reversal was observed during the deceleration phase of the long wave, which agreed with the theoretical prediction very well. Then the theory was extended to describe wave-induced flows inside a viscous mud. Two sets of experiments were conducted, one in the wave tank and the other in the U-tube to investigate the role of the mud-layer thickness compared to the boundary-layer thickness of the mud. Again excellent agreement between the theory and the experiment was achieved. Then the U-tube, which was specially built for the current research, enabled the study of the oscillatory flows of a non-Newtonian fluid. Experimental results showed that the generalized Newtonian constitutive relations, in which the shear stress is assumed to be some function of the rate of shear strain only, are not appropriate in describing unsteady flows of the yield-stress material. More relevant rheological properties were directly calculated from the velocity data and the resulting analytical solutions matched the experimental data very well. Aiming to identify the origins and the development paths of the mean quasisteady flow characteristics in surf zone, laboratory experiments on a train of almost identical solitary waves breaking on a 1:20 sloping beach were carried out and the preliminary results are reported for the first time. Up to two successive waves were generated with the stroke length of the current wave maker. Particle Image Velocimetry technique with fluorescent seeding particles and an optical filter to exclude scattered laser light from broken free surface and air bubbles was employed and the flow field in the surf zone was obtained. By varying the time separation between the wave crests, the interactions were examined in terms of the Froude number and the reflected waves. Further experiments with more waves are needed before reaching any conclusion. In response to this research, a new wave maker has been installed in the DeFrees Hydraulics Laboratory at Cornell University. More results will follow in the near future.