ARCHITECTURE, ANXIETY, AND THE FLUID TOPOGRAPHIES OF RENAISSANCE FLORENCE 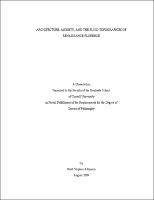 Shared social identities, a precondition of pre-modern urban communities at the threshold of modernity, necessitated the ceaseless readjustment of the built environment. The discursive practices of such city dwellers, therefore, speak volumes about how urban space and architecture are fundamentally a collaborative project whose form, function, and meaning are ceaselessly recreated, rethought, and reinvented. At the height of their city's economic and cultural powers, Florentines developed acute methods to confront, interpret, and shape the built environment. This concerted interaction between bodies and buildings, spaces and desires, allows the historian to articulate how buildings and spaces were understood by contemporaries. Watching. listening, speaking, and then writing, Florentines employed a whole range of political strategies, social rituals, and techniques of representation in order to negotiate their built environment. In doing so, they constructed a web of interlaced and fluid topographies which they overlaid onto the structural grid of the city. Particularly at times of social stress, anxiety, and transformation, interpreting the city -- its monuments, its spaces, the events that shook it, and the narratives that reconfigured it -- was a matter of social survival. As a result, urban spaces functioned as unstable sites of social memory, receptacles of meaning, and facilitators of identity. Drawing on legislation, urban literature, chronicles, and personal diaries, this project seeks to reconstruct the way in which architectural form and meaning were the products of the continuous interplay of an embodied social experience that was rooted simultaneously in a sensorial and mental continuum. By analyzing how Florentines constructed personal and social itineraries -- literally how they moved through, wrote about, and acted upon their physical environment -- I seek to demonstrate how even the simplest movements, deeds, or memories were profoundly structured by and, in turn, continually transformed the symbolic contours of the spaces in which they lived. This Civic dialogue was based on an ethics of organizing and interpreting space. It was a set of rhetorical strategies that demand to be interpreted by an architectural history that acknowledges how the built environment is both the subject and product of a whole range of textual and social practices.