Appropriating Women: The Violence And Potential Liberation Of Textual Revolutions 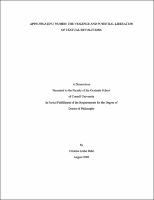 This dissertation relates the violence perpetuated by phallogocentric traditions of reading and writing to the violence of appropriating traditional categories of gender and asks whether or not and how texts that resist these traditions might help us change the way we think about identities, our own and others', opening up a space for new and as yet un-thought ways of exchanging texts and the identities they make possible. Focusing on the ways in which Jacques Derrida's Eperons, Virginia Woolf's Three Guineas, and Elena Garro's "La culpa es de los Tlaxcaltecas" and "El arbol" interminably reverse the roles of readers and writers, further disorienting them with the complex blend of genres in their texts and the networks of other texts that they juxtapose with their own, leads to the conclusion that the ultimate revolutionary function of these texts is to be found in the ways that they suspend the processes of appropriation and identification indefinitely, giving time, namely the time of waiting, but also time that is filled with the constant weaving of narratives, maintaining the possibility that a way out of historical cycles of violence, especially the violence of being forced to fit within current categories, might be found.