Rhetoric And Repetition: The Figura Etymologica In Homeric Epic 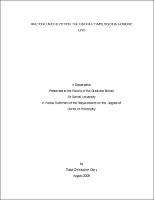 The objective of this thesis is to provide the first thorough analysis of the most basic and redundant figura etymologica, defined as same-clause repetition of semantically equivalent noun and verb from the same root, in Homer, Hesiod and the Homeric Hymns. Examples include: 'to sweat sweat', 'the stream streams', and 'to die (by) death'. A core group of semantically and often derivationally identical idioms 'give gift' and 'live life' to name but two -- have subsisted throughout the history of Indo-European languages from the earliest extant documents to present day. Several observations to be developed in the course of the thesis suggest that Archaic Greek Epic preserves these persistent idioms in their oldest state, and is thus an intrinsically significant place to observe their distributions and idiosyncrasies. Given that these figurae etymologicae occur roughly once every 75 lines in Homeric and Hesiodic hexameters, it ought to be surprising that they have never been the subject of systematic analysis until now. Despite, or perhaps because of its frequency recent studies of poetic etymologizing have offered only curt commentary on the figura etymologica en route to more recherche categories of wordplay, while earlier scholars were harshly critical, labeling both Homer and his audiences unsophisticated precisely because they reveled in the figures. In fact, once some fundamental distinctions among the phrases are coordinated with overall distributions in our texts, a very subtle and sophisticated principle of selection, based on an acute awareness of the constructions' prolixity, emerges. While there have been numerous studies of etymological figures in languages other than Ancient Greek, linguistic and stylistic methodologies have not as a rule been applied together. In this thesis, however, I have found the synthesis of comparative linguistic and stylistic analyses indispensable in the development of a three-dimensional conception of the figures. The general organization of the thesis is meant to facilitate this synthetic approach, and it is hoped that, at the end, the reader will be as convinced as I am that the epic poets approached each figure with a careful rhetorical strategy.