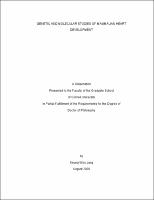 The genetic and molecular basis of mammalian cardiac development was studied in two model systems: German shepherd dogs (GSDs) afflicted with inherited juvenile ventricular arrhythmias and the dark-like (dal) mutant mouse, which I identify as a new model for studying myocardial development. GSDs with inherited juvenile ventricular arrhythmias and sudden cardiac death are an established model for studying cardiac ventricular arrhythmias. The inheritance of this disease in GSDs is consistent with a major gene that allows a dog to be affected and modifiers that influence severity. Genome-wide linkage analysis was performed to identify the loci responsible, but no strong evidence of linkage was detected. As altered calcium homeostasis has been observed in the hearts of these dogs, I examined cardiac expression levels of genes implicated in calcium handling. A significant inverse correlation was observed between the levels of ATP2A2 RNA and its protein product, SERCA2, and severity of ventricular arrhythmias, but no mutations were found in the ATP2A2 coding sequence. SERCA2 is a calcium pump located on the sarcoplasmic reticulum (SR) that sequesters cytosolic calcium back to the SR. My work indicates that SERCA2 is a molecular determinant of severity of ventricular arrhythmias in GSDs and suggests that at least one of the causative genes acts upstream of ATP2A2 transcription. Mice homozygous for the dal mutation are small and have darkly pigmented fur. A spectrum of previously unrecognized developmental cardiac abnormalities was observed in dal mutant embryos, including a thickening of ventricular walls, atrial and ventricular septal defects, and enlarged endocardial cushions. No significant differences were detected in the proliferation status of mutant and control embryonic ventricles, but dal mutant embryonic cardiomyocytes were significantly larger than those of controls. This indicated that the thickened ventricles of dal mutant embryos result from developmental cardiac hypertrophy. Functional consequences associated with hypertrophy included early afterdepolarizations (EADs) and significant irregularities in the Ca2+ transient interval. Positional cloning identified a four base pair deletion in the peptidase D (Pepd) gene and morpholino knockdown of Pepd expression in zebrafish confirmed that Pepd loss of function disrupts normal myocardial development, pigmentation and body size. Pepd encodes prolidase, an enzyme involved in collagen metabolism. I hypothesized that loss of prolidase function in dal mutant embryos causes cardiac hypertrophy by disrupting the extracellular matrix and integrin signaling. Accordingly, I demonstrated reduced expression of integrin transducers and disrupted cytoskeletal organization in dal mutant embryonic hearts. My work provides a novel understanding of the genetic and molecular basis of developmental cardiac hypertrophy and has implications for the mechanisms that control the normal postnatal transition from proliferative to hypertrophic cardiomyocyte growth. These studies provide important insights into the genetic and molecular mechanisms underlying developmental cardiac disorders and will provide useful insights into understanding the pathogenesis of similar human heart diseases.