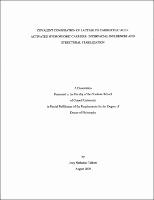 Estimates suggest that 70% of the world's population is lactose intolerant, with certain genetic populations and aged individuals being most susceptible. To address this problem, lactase immobilized reactor systems and packaging films have been explored as economical means to produce lactose-reduced products. Hydrophobic polymers are attractive carriers for enzyme-immobilized applications in the food industry because of mechanical rigidity, cost, ability to mold into different size and shape arrangements, use as food packaging films, low swelling in aqueous solution, and regulatory approval for food contact. The surface of these supports can be modified to produce functional chemical moieties, such as carboxylic acid groups, that are cable of reacting with biological molecules in a covalent fashion to prevent leakage of the enzyme. The enzyme, lactase (Beta-ga1actosidase), however, can lose activity when conjugated to these industry-viable carriers -- limiting application. The objectives of this research were to covalent1y attach lactase to hydrophobic supports in a manner that retains enzymatic activity, determine the mechanism for loss of enzymatic activity upon attachment to a functionalized model system, dcvelop methods for retaining enzyme activity when attached to the carrier, and apply the system to the development of lactase-immobilized packaging films. Lactase (A. oryzae) was conjugated to polystyrene-co-acrylic acid microspheres via carbodiimide chemistry. Immobilization resulted in a decrease M enzymatic activity compared to the intrinsic specific activity. Increasing the density of VP.surface carboxylic acid groups on the carrier yielded a further reduction in specific activity. Blocking of the carboxylic acid-bearing amino acids of lactase with glucosamine produced no significant change in free enzyme activity, but yielded an increase in specific activity compared to the unblocked enzyme when conjugated to the microspheres. The modification of enzyme carboxylic acid groups, also, aided in the retention of specific activity when immobilized to oxidized to low density poly(ethylene) films. Changing the surface properties of polystyrene-co-acrylic acid microspheres by tethering chitosan (Beta-l-4-poly-D-glucosamine), resulted in increased protein loading to the support with no significant change in specific activity compared to the free enzyme under optimum conditions. The results indicate that retention of lactase (A. oryzae) activity upon conjugation to carboxylic acid functionalized hydrophobic carriers is dependent on the interfacial influences associated with the density of carboxylic acid groups on the surface of the support. Altering interactions of the carrier-protein interface by modifying enzyme carboxylic acid groups or changing the surface characteristics of the carrier promotes structural stabilization and retention of lactase specific activity. These methods can be applied to the development of a lactase-reducing food packaging film or an economically feasible polymer-based immobilized enzyme reactor system.