Transmission And Evolution Of Salmonella 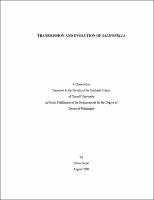 Salmonella, a Gram-negative enterobacterium, is a human and animal pathogen. The species Salmonella enterica includes serotypes with broad and restricted host ranges. The objectives of this study were to utilize genotypic and phenotypic methods to (i) understand Salmonella diversity among human and animal hosts at the population level, and (ii) understand Salmonella genome evolution including the mechanisms of diversity and their contributions to new serotypes. To understand genotypic and phenotypic diversity in Salmonella among human and animal hosts, we used serotyping, multilocus sequence typing (MLST) and pulsed field gel electrophoresis (PFGE) subtyping methods. We found that while some subtypes might have represented host adapted strains within the same serotype, some subtypes were widely distributed among human and cattle isolates. We concluded that isolation of common PFGE types among humans and foods or farm animals must be interpreted carefully and that the establishment of causal relationships will require strong epidemiological linkages and/or the use of additional, more sensitive, subtyping methods. To understand which mechanisms are responsible for diversity in the Salmonella genome, we used 5 whole genome sequences representing four serotypes, Typhi, Paratyphi A, Choleraesuis, and Typhimurium, to identify genes with evidence of positive selection and recombination. Positive selection was detected using PAML 3.15. Intragenic recombination was assessed by four different approaches: GENCONV, Max-chi-2, NSS, and PHI. We found that genes having evidence of recombination may be more likely to be under positive selection. Positive selection may contribute to fixation of new allelic variants generated by recombination. To understand how new Salmonella serotypes emerge, we characterized an emerging serotype, Salmonella 4,5,12:i:-, which is closely related to Typhimurium but lacks the expression of second phase flagellar antigen. We characterized Salmonella 4,5,12:i:- and Salmonella Typhimurium isolates from various sources using MLST, PFGE and PCR screening for differences in presence or absence of genes or intergenic regions. We found that while the majority of 4,5,12:i:- and Typhimurium isolates represented a single MLST type, all 4,5,12:i:- lacked fljA and fljB, which were present in all Typhimurium isolates. PCR screens further showed differences in deletion genotypes among 4,5,12:i:- strains which suggests that Salmonella 4,5,12:i:- appears to represent two different emergence events, both from a serotype Typhimurium ancestor. Overall, my research gives us insight into the evolution of Salmonella that allows us to better understand the transmission and the evolution of Salmonella and its ability to cause disease in different host species. Consequently, we will be able to track contamination sources using much more specific subtyping methods in order to eliminate Salmonella from food products.