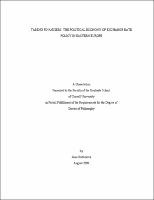 Throughout the transition and developing world, the choice of exchange rate regime is one of the most important and controversial policy decisions. What are the main factors that determine the choices of governments in exchange rate policy? What are the structures and institutions that allow governments to credibly commit to and sustain a fixed exchange rate regime? These are the central questions for this study. To answer these questions, I examine the puzzling variation in exchange rate regime choices in Eastern Europe (EE) and changes in these choices over time. This study is an attempt to explore the determinants of the “de facto” exchange rate arrangements chosen by policymakers in EE. I combine the choice and the sustainability of fixed exchange rate regimes in a political-economic approach. The project’s central finding is that exchange rate regime choices depend on several factors: first, on the different interests and strategies of incumbent domestic (state-owned and private) and foreign banks in determining exchange rate policies; and second, on the bank ownership structure and institutional variation of national financial systems. The variation in national financial systems between EE countries is, in turn, a function of the variation in privatization strategies and openness to foreign investments in the banking sector. This research thus demonstrates how the connection between financial interests and exchange rate regime choices is mediated by domestic financial systems. This dissertation integrates theories of financial development into interest groups theories in the political economy of exchange rates. I evaluate this argument against two types of evidence. Statistical analysis of cross-national time-series data allows me to test the impact of financiers on exchange rate policies against a sample of twenty-five EE countries between 1990 and 2004. Statistical analysis is accompanied by in-depth examination of four theoretically important cases—Bulgaria, the Czech Republic, Poland, and Estonia—based on a thorough reading of the relevant secondary literature, the perusal of central bank, government and archival documents, and the conducting of 105 semi-structured interviews. The thesis develops a novel four-fold typology of financial systems in EE—capture, collusion, consensus, and competition—exemplified by the four countries.