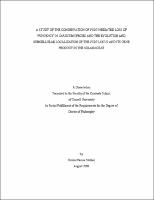 Capsaicinoids are valuable plant secondary metabolites, arguably among the world's most widely consumed products of a plant secondary metabolic pathway. Their distribution is restricted to the genus Capsicum (family Solanaceae). Studies documenting the inheritance of pungency have revealed that mutations at a single locus, Pun1, are responsible for loss of pungency in cultivars of the species C. annuum and C. chinense. This study presents the identification of a previously unreported null allele of Pun1 from a non-pungent accession of C. frutescens, the third species in the annuum-chinense-frutescens complex. The loss of pungency phenotype in C. frutescens maps to Pun1 and co-segregates with a molecular marker developed to detect this allele of Pun1, pun13. While this mutation is allelic to pun1 and pun12, the mutation causing loss of pungency in the undomesticated C. chacoense, pun2, is not allelic to the Pun1 locus as demonstrated by mapping and complementation studies. Pun1 encodes AT3, an acyltransferase belonging to the BAHD family of acyltransferases. Sequence from the coding region of AT3 shows a high level of conservation throughout Solanaceae. A tandem duplication of this gene, designated AT3-1 and AT3-2 respectively, predates the diversification of the Solanaceae. The AT3-2 locus, now a pseudogene, retains regions of amino acid conservation relative to AT3-1. Both Bayesian and maximum parsimony methods demonstrate that the paralogous gene lineages AT3-1 and AT3-2 form well supported phylogenetic clades. We find support for the species complex comprising C. annuum, C. chinense and C. frutescens, widely reported in the literature and which includes Lycianthes. Additionally, in C. rhomboideum, a recombination event has occurred between AT3-1 and AT3-2. In this species, a deletion in AT3-1 eliminates the highly conserved motif DFGWG and is correlated with non-pungency. Finally, this study finds that AT3-1 localizes to the endoplasmic reticulum (ER) suggesting that AT3-1 is not capsaicinoid synthase and that the DFGWG motif may be important for this localization. Treatment with Latrunculin A disrupts AT3-1 localization providing further evidence that it associates with the ER. This analysis sheds light on the putative role of AT3-1 in this intriguing plant biosynthetic pathway.