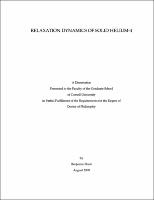 The torsional oscillator (TO) experiments of Kim and Chan have been principally interpreted as providing evidence that solid helium-4 (4 He) undergoes a transition below 100 mK to the 'supersolid' state of matter, so called because of the coexistence of superfluid behavior and other properties usually attributed to the solid phase. In this dissertation, we report on experiments that were designed to study particular aspects of the behavior of solid 4 He that were difficult to reconcile with the traditional picture of superfluidity. In the first set of experiments, motivated by a number of proposals that solid 4 He could contain a component that behaves as a structural glass, we study the relaxation of a torsional oscillator containing solid 4 He. We show that the relaxation time to thermal perturbations in both the resonant frequency f and the dissipation Q exp(-1) lengthens as T pointing to 0. This lengthening of the relaxation time is unexpected for superfluids, but may be evidence for the presence of a glassy component. In the second set of experiments, we employ a new technique to map efficiently the temperature and velocity dependence of the TO frequency shift and dissipation. The motivation for these experiments was the surprising result that the 'critical velocity' of the supersolid 4 He was of the order of 10 mu-m/s, some three to six orders of magnitude smaller than typical critical velocities in superfluid 4 He. We find a remarkable symmetry of both f and Q exp(-1) along the temperature and velocity axes, and the dependence of the TO resonant frequency and dissipation on velocity was dissimilar to any known critical velocity behavior in superfluid 4 He. This leads us to propose that the same excitations of the 4 He solid generated by temperature might also be generated by agitation of the solid.