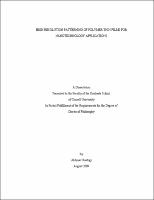 The ability to pattern functional polymers at different length scales is important for the advancement of modern science and technology. This dissertation mainly describes the work done on the high resolution patterning of polymer thin films that have a variety of potential uses. The nanoscale patterning of spun-coated polar polymers was demonstrated using environmentally benign supercritical carbon dioxide (scCO2) as a processing solvent. The use of scCO2 as a processing solvent has several technical advantages that help resolve some of the key problems faced in lithography. In addition, it helps reduce the energy and resource usage that can negatively affect the environment. scCO2 is generally a poor solvent for high molecular weight polymers that are used as standard photoresists. Chapter 2 describes a series of fluorinated quaternary ammonium salts that were synthesized and used as CO2 compatible additives to aid the dissolution of polar polymer photoresists in scCO2. Using these dissolution aids, patterns as small as 100 nm lines were obtained with scCO2 development. Chapters 3 and 4 focus on the patterning of high-tech thin polymer films referred to as polymer brushes. In these films the polymer chains are covalently attached to a surface. A direct method of patterning polymer brushes in a single step using electron beam lithography has been described. Polymer brushes of different structures such as poly(methyl methacrylate) (PMMA) brushes , poly(2-hydroxyethyl methacrylate) (PHEMA) brushes, poly(isobutyl methacrylate) (PIBMA) brushes, poly(neopentyl methacrylate) (PNPMA) brushes and poly(2,2,2-trifluoroethyl methacrylate) (PTFEMA) brushes were grown via atom transfer radical polymerization. These brushes were directly patterned using e-beam and their sensitivity to e-beam patterning has been compared and explained. This direct patterning approach produced polymer brush patterns down to 50 nm lines. Due to the number of advantages of using scCO2 as a processing solvent, the dry development of a directly patterned low surface energy coating composed of PTFEMA brushes in scCO2 has been demonstrated in Chapter 4. Using scCO2 as a developer, patterned PTFEMA brushes with 150 nm lines were obtained. Polymer brushes have been used to prepare biocompatible surfaces with reduced non-specific adsorption. Chapter 5 describes the synthesis of a new oligo(ethylene glycol) containing ATRP intiator to prevent non-specific adsorption of biomolecules on polymer brush coated gold electrodes. The adsorption of non-specific antibodies on modified gold electrodes was studied using cyclic voltammetry. Poly(acrylic acid) brushes grown using this new ATRP initiator showed reduced nonspecific binding of the gold electrodes. There has been a continuing need for developing new medical countermeasures for emerging infectious diseases. Chapter 6 describes the role of functionalized poly(acrylic acid) brushes in the development of a biosensor based on sensitive electrochemical detection of the intrinsic catalytic activity of antibodies. Poly(acrylic acid) brushes have been functionalized with 2,4-dinitrophenyl groups (model antigen) and Ni-NTA to immobilize specific antibodies on the sensor surface. The modification of gold surfaces with polymer brushes provides a bio- and electronically compatible substrate with high density of specific haptens with reduced non-specific adsorption.