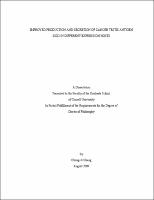 There is a great demand to develop new therapeutic strategies to treat cancers. Of the potential therapeutic strategies, cancer testis antigen SSX2 has shown promising effects for the treatment of different cancers. To produce the quantities of SSX2 required for the human Phase I/II proof-of-principle clinical trials, improved production and secretion of SSX2 were studied in two microbial systems, Escherichia coli and Pichia pastoris. The first part of this work shows the development of a production process for SSX2 antigen from E. coli strain C41(DE3), resulting in a yield of 1.1 g L-1 as inclusion bodies. Urea-solubilized SSX2 inclusion bodies were purified by immobilized nickel affinity, anion exchange and hydrophobic interaction chromatography. Purified SSX2 was characterized by ELISA and recognized by human sera containing anti-SSX2 antibodies. In the second part of this study, further process development and production scale up of SSX2 were carried out in the Cornell/LICR cGMP facility. The yield, endotoxin content and purity of SSX2 were improved in the newly developed process. The result of a 10 L scale development run is also presented. The third part of this work focused on the improvement of SSX2 secretion by P. pastoris as a means to produce a delayed-type hypersensitivity (DTH) skin test reagent for SSX2 cancer vaccine. SSX2 was minimally secreted by P. pastoris. Deletion of the SSX2 C-terminal nuclear localization signal (NLS) did however improve secretion. NLS was responsible for accumulation and misfolding of SSX2 in endoplasmic reticulum (ER) and deletion of NLS improved SSX2 folding inside the ER to facilitate its secretion. Production of SSX2 without NLS was scaled-up, resulting in a yield of 21.6 mg L-1. The last part of this work reveals the proteome of different fermentation culture media of P. pastoris as a means to enhance recombinant protein purification and secretion. The study of the proteome of different P. pastoris cultures indicates that most proteins exhibit acidic isoelectric points including naturally secreted and intracellular proteins. This study provides host cell protein profiles in different fermentation culture media and suggests potential biotechnology applications based on the discovery of these proteins.