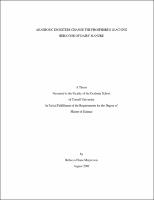 This study analyzed how anaerobic digestion of dairy manure might change the amount, form, and rate of phosphorus (P) leached by rainfall. Anaerobic digestion has become an increasingly popular manure management option because it generates methane that can be used to make energy, but little is known about the behavior of P when digested manure is applied to fields. Leaching experiments were performed using simulated rainfall on digester influent (undigested manure) and effluent (digested manure) collected from a dairy farm near Ithaca, NY. A previously published manure-P model was applied to the experimental data to quantify rates of P leaching. Dissolved P-leaching from digested and undigested manures were similar to each other, although digested manures appear to generally leach more dissolved P. Interestingly, both digester influent and effluent leached dissolved P more rapidly and in greater quantities than fresh manure, i.e., manure from a dairy barn floor. It is suggested that the key difference between the liquid manures in this study and "fresh manure" is that fresh manure has a higher solids content, i.e., it is less liquid than the manure used in anaerobic digesters. The findings of this study suggest that it is important to avoid field spreading of liquid manures when rainfall is imminent or fields are wet in order to prevent nonpoint P loading to streams and lakes.