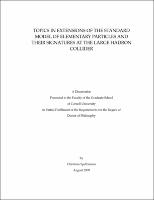 The mechanism for electroweak symmetry breaking (EWSB) is yet unknown and the hierarchy between the EWSB scale and the Planck scale is not understood. Several alternative mechanisms for EWSB were postulated by theorists. In the near future, experiments at the Large Hadron Collider (LHC) at CERN will begin testing these theories. In this thesis, we explore two of the postulated mechanisms, supersymmetry and little Higgs models, and some of their consequences for the experiments at the LHC. The "golden region" in the parameter space of the Minimal Supersymmetric Standard Model is the region where the experimental constraints are satisfied and the amount of fine-tuning is minimized. In this region, the stop trilinear soft term At is large, leading to a signficant mass splitting between the two stop mass eigenstates. As a result, the decay ~t2 -> ~t1 x Z is kinematically allowed. The experiments at the LHC can search for this decay through an inclusive signature, Z + 2jb + ET + X. We evaluate the Standard Model backgrounds and / identify cuts to isolate this signal. We also discuss other possible interpretations of such a signal. We then construct an anomaly-free, weakly-coupled, renormalizable ultraviolet completion of the Littlest Higgs model with T-parity (LHT), based on an SU (5) x SU (2) x U (1) gauge theory with a discrete Z2 symmetry. The model re- produces the complete structure of the LHT below the 10 TeV scale and contains additional states at the 1 TeV scale. We estimate the impact of these states on precision electroweak observables and discuss how the model can be embedded into a supersymmetric theory or a five-dimensional setup with a warped extra dimension. Finally, we investigate the potential of the Compact Muon Solenoid (CMS) detector at the LHC to discriminate between supersymmetric and Little Higgs models. We find that the angular and momentum distributions of the observed jets are sufficient to discriminate between the two models in a simple test case scenario with a few inverse femtobarns of LHC data, provided that these distributions for both models and the dominant Standard Model backgrounds can be reliably predicted by Monte Carlo simulations.