Columbus Of The New Deal: Rexford G. Tugwell And The Goals, Challenges And Physical Legacies Of The Resettlement Administration 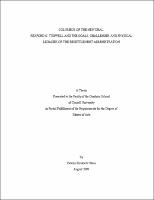 This thesis examines the agrarian economics beliefs of Rexford G. Tugwell prior to entering public service in order to understand the impetus for establishing the Resettlement Administration under President Franklin D. Roosevelt's New Deal program. The work beings with an examination of the historical themes and developments of the late 19th and early 20th-centuries that influenced Tugwell and the Roosevelt Administration, followed by Tugwell's pre-administration writings. Four influential themes from this professional period would later guide his policies as leader of the Resettlement Administration. The thesis concludes with a discussion of the agency's goals, obstacles, and policies between 1935 and 1936, and how they related to two of its flagship programs, Greenbelt, MD and the Chopawamsic Recreation Demonstration Project. This work seeks to expose the history of an important, but relatively obscure, New Deal agency, and interpret Rexford Tugwell's role in its creation, and contribute to a broader discussion about the evolution of American land-use patterns in America.