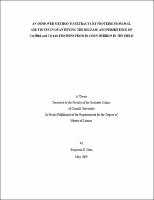 Transgenic corn expressing the insecticidal crystalline (Cry) proteins derived from the bacterium, Bacillus thuringiensis (Bt; Bt corn), has been engineered to render plants resistant to Western corn root worm (CRW; Cry3Bb1) and/or European corn borer (ECB; Cry1Ab). As a result of the many agricultural and environmental benefits accrued, rapid adoption and widespread use of transgenic Bt corn has occurred over the past ten years and will likely continue to expand, potentially resulting in the accumulation and persistence of plant-produced Bt proteins in soil. In this investigation, I worked to resolve some analytical issues, such as low recovery of Cry3Bb1 and Cry1Ab proteins from field soils, and to quantitatively measure these proteins released in agricultural soils where many different varieties of Bt corn were being grown. First, non-Bt agricultural field soils were spiked with environmentally relevant concentrations of the two Cry proteins. The proteins were then recovered from the soil to evaluate the effects of physical and chemical modifications to the standard extraction methods until an improved protocol was developed for optimal soil-protein recovery. Poor protein recoveries from soil were reconciled when soil extraction protocols were modified to include bead-beating with two glass beads, a 2 h ELISA (enzyme-linked immunosorbant assay) plate incubation, and the use of an extraction buffer developed by Palm et al. in 1994. Second, soils were collected from the rhizosphere of Bt corn hybrids being grown in varietal trials at five field sites around New York (NY) State. The concentration(s) of the Cry3Bb1 and Cry1Ab proteins in these soils was measured using the modified protocol. The effects of climate, crop and soil factors on the release of these proteins from Bt corn were evaluated. In one soil from a field site in Aurora, NY, where Cry3Bb1 corn was grown for three consecutive years, the persistence of the Cry3Bb1 protein was evaluated. Results showed that Bt corn expressing Cry3Bb1 releases this protein into soil from its roots and residues under NY environmental conditions. Cry3Bb1 was rapidly biodegraded in soils sampled at pre-planting and after-harvest during the 2006 growing season at Aurora, NY, indicating a low potential for persistence. Concentrations of Cry3Bb1 at the six NY sites varied. However, where soils contained a higher percentage of clay, much higher concentrations of both Cry3Bb1 and Cry1Ab were detected, compared to sites with lower clay contents. Bt corn plants without the construct for Round-up resistance (RR) had significantly higher concentrations of Cry3Bb1 and/or Cry1Ab compared to plants with the RR construct. The concentrations of Cry3Bb1 in rhizosphere soils of the different Bt corn varieties tested varied considerably, but were significantly greater for the variety TA5859, which contained the stacked construct, CB-RW (corn borer-root worm). Cry1Ab concentrations in rhizosphere soils also varied between corn varieties, even when they were grown under similar environmental conditions. Lastly, Cry3Bb1 concentrations in rhizosphere soils were significantly higher than those of Cry1Ab. In summary, Cry3Bb1 protein was rapidly biodegraded and did not accumulate or persist in field soil under NY State conditions. Thus, Cry3Bb1 is unlikely to pose any significant ecological risks to soil organisms in these locations.